cognitive science
and more
Cite my journal or else: Coercive self-citation in academic publishing

Cite my journal or else: Coercive self-citation in academic publishing 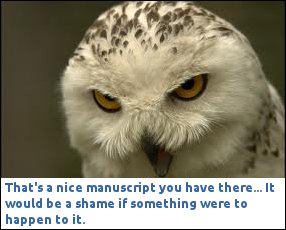 Editors will try to boost their journals' impact factor, of course. This is good, for the most part, because it provides editors with an incentive to create a decent journal that publishes good science. But as Wilhite and Fong show in a recent edition of Science, there's a dark side as well: Coercive self-citation.

Wilhite and Fong distributed a survey under academics from various disciplines. In this survey, respondents indicated whether, when submitting a manuscript to a journal, they had ever been asked by the editor to include useless citations to other papers from that same journal. The motivation for the editor to do so is obvious: Additional self-citations raise the journal's impact factor. Wilhite and Fong give a strikingly blatant example of such a request made by an editor to an author:

"You cite Leukemia [once in 42 references]. Consequently, we kindly ask you to add references of articles published in Leukemia."

Clearly, this seemingly friendly question implies something that is not very friendly at all: Add the requested citations or your paper will not get published.

The results of the survey indicate that about 20% of academics have experienced coercive citation. I'm not among them, and it probably goes too far to say that it is common practice. But still, I was unpleasantly surprised by this number.

What is perhaps even more shocking is that editors appear to be clever about when and when not to coerce authors into adding spurious self-citations. They have to be clever, because this practice is frowned upon. If a journal becomes known for coercive citation, its reputation will suffer and consequently its impact factor will go down rather than up. There's even a chance of being temporarily excluded from Thomson Reuters' Journal Citation Reports which is the most influential list of journal impact factors.

Editors are shrewd in two main ways. First, they primarily target those authors that are most likely to give in: Young scientist, who are easily intimidated and for whom the publication pressure is largest. Second, they primarily target papers with a small number of authors. This minimizes the risk of reputation damage: The fewer people know about it, the better.

Whilhite and Fong also provide of a list of the worst offenders. The top 5 consists entirely of journals from business (marketing, accounting, finance, etc.), the discipline in which coercive citations is most prevalent. And as pointed out on the Scholarly Kitchen, 4 of the 5 worst offenders are Elsevier journals. I must admit that this last point brought a little smile to my face.