cognitive science
and more
Stabilizing vision: do the chicken head

Stabilizing vision: do the chicken head

The Chicken Head is a dance that was popularized by the video clip to Chingy's Right Thurr, which was a big hit back in 2003.

If you do the Chicken Head well, the flapping of your 'wings' makes you look a bit like a chicken. Another distinctly chicken-like aspect of the dance is that you need to keep your head more or less still, while swinging your body from side to side.

For this post I will elaborate a bit on this last point.

As you can see in the video above, chickens are remarkably good at keeping their head still while their body is moving. They are able to do this when someone else moves their body, as in the video, but also when they move themselves. This is why a chicken's head (or a pigeon's head, as in the video below) bobs back and forth during walking: The chicken keeps its head still with respect to the environment by moving it backwards to compensate for the forwards body movement. This continues until the head cannot move back any further, at which point it rapidly snaps forward, momentarily breaking the otherwise near perfect head stabilization (see note 1 below for a popular myth on head bobbing).

When you think of it, head stabilization is a remarkable feat: The gravitational (or vestibular) sense is required to keep the head up-right, regardless of the body's orientation. And you also need to take into account the position of the body parts relative to each other, which is called proprioception.

So the obvious question is: Why has the chicken evolved this remarkable ability to keep its head stable? An ability that surely requires a sophisticated neural apparatus.

In fact, this phenomenon is not limited to chickens, or even to birds. Almost all animals exhibit these types of stabilizing reflexes. Some engage their entire head, just like chickens do. Other animals, including ourselves, stabilize only the eyes. This allows us, for example, to keep our eyes fixed on someone throughout a conversation, despite the fact that we regularly nod or shake our head.

But why? Why the need to stabilize the head, or at least the eyes?

The answer lies in the way that the eyes work. Light shines through the pupil onto the retina in the back of the eye. You can therefore think of the eyes as containing a retinal image, formed by the pattern of light falling onto the retina. 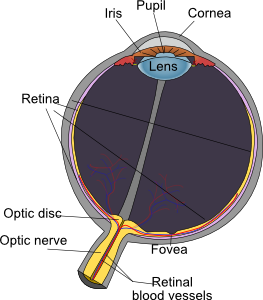 But the retinal image has the following drawback: It is anchored to the eye, and therefore it changes when the eye, or the body to which the eye is attached, moves. Therefore, if an animal would not engage in any kind of stabilizing behaviour, all movement would result in disturbances of the retinal image, or retinal image motion.

But this begs the question: What's so bad about retinal image motion?

There are a number of reasons why you should try to avoid retinal image motion. All of these are described in detail by Land and Nilsson in their excellent book Animal Eyes, but here I will explain two.

The first has to do with the sluggishness of the light sensitive cells, or photoreceptors, which form the basic building blocks of our eyes. This sluggishness imposes a fundamental limitation on vision: We cannot see things that are presented extremely briefly or that move very fast. If something flashes by too quickly, photoreceptors are simply not stimulated for a sufficient period of time. We may be able to catch a glimpse of something, but it will be blurry. And if we would not stabilize our eyes (or our entire head), our own movements would cause the world to sweep across the retina very rapidly. So rapidly, in fact, that it would cause blur. In other words, to prevent blurry vision, you should keep the eyes still.

The second reason has to do with the way that we process visual information once it has reached the brain. Or, more specifically, with how we detect motion. If our eyes don't move, motion detection is easy: All movement on the retina corresponds to movement 'out there' in the world. But if our eyes are moving, things become considerably more difficult. Because in that case the entire retinal image is always moving. Considerable computation will therefore be required to distinguish retinal motion that is artefactual, in the sense that it results from our own movement, from retinal motion that is real, in the sense that it corresponds to movement 'out there'.

So, in sum, the head stabilizing behaviour that you saw in the first video serves an important purpose: It prevents unnecessary retinal image motion, and consequently avoids blurry vision and impaired motion detection.

1. It is often said that pigeons (and other birds) bob their heads back and forth to facilitate depth perception. The reasoning is that pigeons are supposedly not able to use stereoscopic vision, because their eyes are on the side of the head and have no overlapping fields of view. So, instead of using two eyes to see depth, they swiftly move their head back and forth, essentially simulating stereoscopic vision with a single eye. This, as far as I know, is completely incorrect. The pigeon's eyes do have somewhat overlapping fields of view, so they can use stereoscopic depth perception just like we can. And, at any rate, the head bobbing eliminates retinal motion, rather than causes it, so it could never serve depth perception.

That being said, there are animals, such as the praying mantis, that bob their head sideways. This could theoretically serve depth perception. So the head-bobbing-for-depth-perception myth may have a ring of truth, even though it's incorrect when it comes to pigeons.