Conclusion An accessible and entertaining book, in which Victor Lamme argues that we have far less insight into our own motivations than we like to believe. 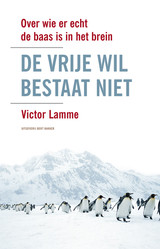 Have you ever wondered who's really in charge in your brain? Victor Lamme, professor of cognitive neuroscience at the University of Amsterdam, certainly has. In fact, he has devoted an entire book to it. “De vrije wil bestaat niet” (“Free will does not exist”) is a popular science book, which provides an accessible and amusing account of a large number of psychological studies. In the course of describing these studies, Lamme converges on the conclusion that our behaviour is largely determined by factors into which we have little insight: e.g., our tendency not to disagree with group consensus, our fear of other ethnicities, our tendency to select right-most socks (!), etc. Consciousness is simply a spectator which, after th4 Star Rating; Recommendede fact, interprets our behaviour in the best way it can. In this sense free will does not exist, according to Lamme.

Before I bought the book, I had read some mixed reviews. Some people feel that Lamme's claims are overstated, especially when he uses “case studies” like Winston Churchill's military tactics during WWII to drive his point home. However, these case studies (a murder case in which the assailant was aquitted after pleading “sleepwalking” is another one) are backed up by solid research. Lamme makes a compelling argument: We have very little insight into our motivations and, consequently, are poor at predicting our own behaviour.

The book is well written. The experiments are explained in simple terms and all the usual suspects are described (e.g., the Stanford prison experiment, the Milgram experiment and Libet's “clock” studies). The style is quite distinct from other books on free will and consciousness, which tend to be inaccessible (such as Dennet's book “Freedom Evolves”), and resembles more the writing of (say) Richard Dawkins.

In conclusion, I would describe the book as a gentle introduction to cognitive neuroscience. Of course, the focus is on free will, but the book touches upon numerous other topics as well. I certainly found “Free will does not exist” to be a pleasant read!

Get this book on bol.com or selexyz.nl.