Another cool illusion is the “reverse spokes” illusion, which has been studied by Anstis and Rogers (and probably discovered as well. Anstis describes the illusion very modestly as “new, or newish”.). As you can see in the image below, the spokes (the grey lines separating the “pie-slices”) appear to be rotating clockwise. On closer inspection you can clearly see that this is not the case. In fact, what is happening is that a “colour wave” traverses the wheel in a counterclockwise direction. That's weird. The actual movement is in the opposite direction of the movement that we perceive! (you can download a script here to generate these types of animations) 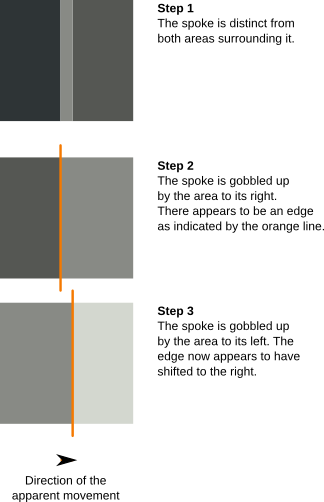 At this point you may wonder why we perceive the entire wheel to be rotating. Shouldn't we perceive something like individual spokes making small jumps? Presumably, we automatically combine all spokes into a single object (Gestalt grouping). Since there are always exactly two spokes in (apparent) motion, there is always some part of the object in motion and therefore the entire object appears to be in continuous motion.